I sat with my hands folded on my lap, wearing my long black dress and black hijab. My mother was chatting and laughing with two women, while a thoroughly unpleasant man sitting near her stared at me with what I could only interpret as a sort of curious lust. I was fifteen years old, and I was doing my best to be invisible, but it obviously wasn’t working.

I tend to speak of every member of my family in the past tense. This is because I have no contact with my family any more. The way my life has unfolded is not acceptable to their way of thinking, and they have cast me out as not worthy of our family name. 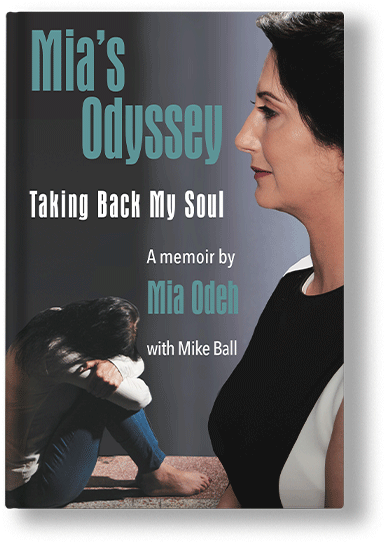 I’ve heard it said that every young girl dreams of her wedding day. I lived in absolute dread of mine.

Sitting in my chair, next to my new husband…I felt like I was out of my body, sadly floating over everything that was going on, detached, almost a spectator

A few days later I had to say goodbye to my sister, and as I did I felt the last bit of that fragile ribbon connecting me with my old life slipping through my fingers.

I walked into that strange house, my new home, carrying a suitcase that was almost as big as I was. When the door closed behind me, it felt like a prison door slamming shut.

… for the rest of the semester I made it my mission to really learn how to speak English. For one thing, it took my mind off the unbearable sadness of losing my baby. It also gave me a chance to find ways to better survive in this strange world. It was still hard for me to engage with anyone, and I had no idea how to make friends, so I remained alone. Walking the halls each day at the high school I felt like a creature from another planet.

Then, the first time I felt my baby move inside me, it was a feeling that I can’t describe. I somehow knew that this tiny life was good, and pure, and not corrupted by this world. I knew that somehow I would have to find a way to keep him pure, to keep him from becoming the unfeeling beast that his father was. In that moment, feeling that precious life inside me, I vowed to somehow make him the best man he could be.

The doctor told me…I would have to stay off my feet for the entire last month of the term. Considering a husband who had three children and had never once even changed a diaper, I could only laugh.

He was such a big man, and I was so small, that all I could do is try to cover my head and pray that it would be over soon. Lying there on the floor I felt like simply letting him kill me might be the best way out.

… the verbal and physical abuse from Fayed became almost constant…When I had any time to myself I would sit in the window, looking out and wondering how it would feel to love and be loved. I would imagine myself in a different life enjoying a nice dinner with my soulmate, talking about things we both cared about. Then I would spend the night crying into my pillow, praying for release.

A few days later when the cab pulled up to take Fayed to the airport, we all lined up as if we were some sort of dutiful, loving family to say goodbye to him. The minute he was out of sight, though, I began to sing in Arabic and dance for joy. The children thought I had lost my mind…I can honestly say that it was also the best six months I had known in my entire life.

You know, sometimes you have to get a little distance from something before you can really see it…with Fayed nearly two thousand miles away, I began to see him differently than I ever did before…Now, enjoying those wonderful days with my children, Fayed would just occasionally flit though my mind. In those moments I would see him from a long way off as nothing more than a small, evil, isolated creature.

It all came back when we walked into the terminal and I saw Fayed standing there, scowling at us…Fayed simply turned his back on us and walked away, expecting us to follow behind like his flock of sheep. This man didn’t even have a hug to give his children.

…Danny climbed into my lap and whispered, “Mommy, how come it’s cold to be around my father and so warm to be around you.” “Because it’s my job to be your sunlight.” I paused for a few seconds and thought of an afternoon in Qatar two years ago, when a frightened and desperate woman, flirting with death, looked in a bathroom mirror and then decided that she had five good reasons to live. “And I promise you that I will keep doing my job for you as long as the world turns and there are stars in the sky.”

…with a flash of understanding I knew that I could not take my children back to that place, where all my choices would be gone…That place where my daughters would grow up to become slaves to their husbands. That place where my boys would be taught to believe that they deserved to have wives who were nothing more than slaves. I knew that, for the first time in my life, I had to fight back

“Will you take my children?” The officer looked at me for a few seconds before he answered. “No ma’am,” he said. “I can promise you that nobody is going to take your children away from you.” “Thank you,” I said. I wanted to hug him with gratitude, but this is not something proper for a Palestinian girl like me to do.

…I ran from bedroom to bedroom, trying to make good decisions about what the kids and I were likely to need…As I threw things into suitcases and garbage bags it occurred to me that the next day was my birthday. I had never received a birthday present for myself, or enjoyed any sort of celebration, so it almost made me laugh when the thought popped into my head that this escape from Fayed, however it turned out, was one gift that would last forever.

As I got the kids settled in the car I could see the fear in their faces. They were confused and exhausted, and looking to me for comfort, but I couldn’t find any to give them. I was walking in the dark myself, and I simply had no idea what was going to happen next.

To this day I still struggle with insecurity, afraid that the life I have now is too good to be true. After thirty years of abuse and uncertainty, I can’t help wondering when this bubble will burst. Sometimes at night I wake up in cold sweats, buried under a feeling of crushing uncertainty and doubt. Some days it’s still very hard for me to trust anybody, or even look at myself in the mirror without seeing the face of a terrified little girl. Then I look around me and realize that I really have emerged from that long nightmare to become the woman that God meant me to be. 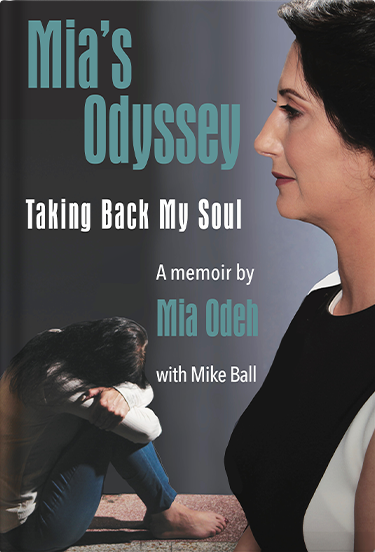 “I knew that, for the first time in my life, I had to fight back” – Mia Odeh